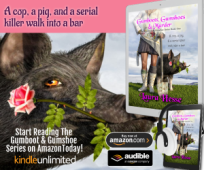 Gumboots, Gumshoes & Murder, Book One in the Gumboot and Gumshoe Series – FREE on Amazon worldwide.

A comedic cozy mystery series for lovers of Miss Marple or Murder She Wrote.

When Gertrude, a rascal of a pot-bellied pig, discovers widow, Eliza Bone, floating upside down in her Oscar fish tank, Sgt Betty Bruce has a hard time believing Eliza’s death is accidental. The one clue left at the scene is a gumboot print, men’s size 8. After two more bizarre deaths happen on the sleepy little island, Betty is left to wonder if there is a serial killer at work. 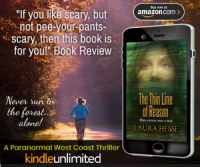 The Thin Line of Reason – a paranormal thriller – FREE on Amazon worldwide.

Sarah Lancaster and her brother, Bill, have something in common. Too bad they don’t know it.

When a ghost from Sarah’s past walks into her neighbourhood gym, it triggers a game of cat and mouse with a killer that everyone but Bill thinks is dead in this twisted supernatural thriller. 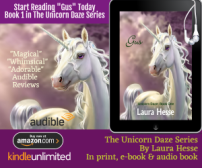 Gus, Book One in the Unicorn Daze Series – a children’s short bedtime story for unicorn lovers – FREE on Amazon.

Meet Jessie, a girl who is always getting left behind. When she gets lost in a corn maze on Halloween, she meets a unicorn named Gus who takes her to meet the Spirit Bear who guards the corn maze.

This entry was posted on August 2, 2020 by runningl. It was filed under Uncategorized .

This site uses Akismet to reduce spam. Learn how your comment data is processed.