The Thin Line of Reason: the place where reality and illusion collide. A paranormal west coast thriller.

What kind of man wears a dead man’s face?

When a ghost from her past walks back into her life, Sarah Lancaster unwittingly finds herself embroiled in a twisted romance with a killer. While fighting for her sanity, she must unmask the killer’s true identity in order to find the strength to stop being a victim. But who is the real killer? The ghost in the shadows, the man who wears a dead man’s face, or the man she trusts with her life?

In the Thin Line of Reason, everyone wears a mask. 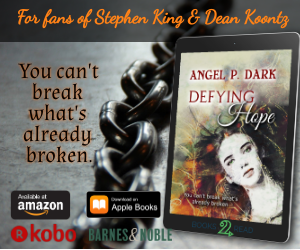 For Hope Sanderson, the horror has just begun.

For Sister Constance, the horror started a long time ago.

It becomes a test of faith and endurance when junkie, Hope Sanderson, is chained to a steel girder inside a derelict building at an abandoned gravel pit by a renegade nun trying to fulfill a promise to her little sister to help her ‘bestest friend’ get clean.

In a world of good and evil, lines get blurred, and rolls get reversed in this disturbing paranormal thriller with a touch of comedy. Go ahead, dance with the devil in Angel P. Dark’s breakout new novella.