Wow, it has been a busy week. 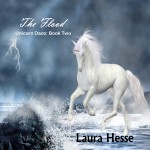 Independence will be coming out in audio book by mid-August. The very talented voice over artist, Valerie Voiceover (Ashline) is just starting work on the project. Valerie’s voice is sooooo Susie Stetler.

I also just completed the narration for The Flood, Book Two in the Unicorn Daze series. If my recording passes the ACX and Audible approval process, that will be out in about 2 weeks.

Woohoo…telling stories is so much fun.

I am so thrilled to announce that Shelley Reece has accepted the contract to narrate Valentino. While I am enjoying narrating my own short children’s stories, each novel that I write has a different ‘voice’ to it. I can hear the characters in my head when I write the story and I have been so very fortunate to meet some amazing professional voice over artists in Leslie Howard, who narrated One Frosty Christmas and A Filly Called Easter, and now Shelley Reece. When I heard Shelley’s portfolio on ACX, I could hear the voices of both Maddie and August talking to me. Stay tuned for updates on our progress.

Well, my very first self-recorded audio book is now available on Audible. It will appear on Amazon and itunes in the next few days. It was really fun to do. I have great respect for professional narrators who narrate longer novels. It isn’t recording the narration that takes time; it is the fine tuning and editing of the final draft.

Click on the CD cover to hear a preview. Hope you enjoy it.

This is a short story for children ages 3 – 8 who love unicorns and adventure.

Jessie and Gus take a leap through time to meet Noah and his wife and find out what happened to all the unicorns.

This is a fun story written in an easy to read play format which can be read as is, with or without voices, or acted out by the kids. The print book will be released shortly.

The following is a preview of Gus, Unicorn Daze: Book One. It is suitable for ages 3 and up. The full audio book including the following children’s short stories, Gus, The Flood, and The Unicorn King, will be ready by the end of May 2018. Stay tuned. https://youtu.be/BkqwQwHphO8

Coming soon to Amazon, The Flood, the second book in the Unicorn Daze series.

Ever wondered what happened to those silly unicorns when they missed the boat?

Jessie and Gus find out the answer when they travel back in time to meet Noah and his wife minutes before the Great Flood covers the world.

Stay tuned for more adventures with Jessie and Gus.

I am quite tickled to announce that the short story, Gus, is now live on Amazon worldwide in both print and e-book format. It is a wonderful bedtime read for kids who love unicorns. I published the story in an easy to read play format so that it can be told with or without voices or the kids can get together with their friends and act it out. I have performed this story in numerous school readings and it has always been a success. https://www.amazon.com/dp/B07CV49YR6/ref=sr_1_8?s=books&ie=UTF8&qid=1525448808&sr=1-8&keywords=laura+hesse

Thank you to the McNab family and their delightful corn maze in Yellowpoint on Vancouver Island without whom this story would never have been written.

May all your mounts be swift and your mountains an easy climb.

This story is written in a screenplay/play type of format. It can be read as it is or it can be read out loud as a bedtime story, with or without voices, or acted out as a play.

The tale of Gus, the Unicorn, and Jessie, the kid that always got left behind, was a favorite of the kids during my school readings. One class of eight year-olds asked if they could participate in the reading. I was thrilled. The kids had a blast reading their parts out to the class and got quite into the characters.

I will also be doing a live reading of this story shortly, so please visit www.RunningLProductions.com and simply hit the ‘follow me’ button or subscribe to my newsletter to learn about upcoming new releases of books and videos. You can also follow me on Facebook. Videos and new release information will be posted there as well.

Eight year-old Jessie Farrell lived in a two storey gabled house at the end of a dead end street where toys and bicycles littered the yards. The tree lined street on which her house sat was alive with fall color. The houses were decorated for Halloween. Pumpkins grinned at people passing by from front porches. Black cut-out witches hung inside windows. White sheeted ghosts hung from tree branches.

There was a rusty squeak as the garage door suddenly flew open at the Farrell house. Mr Farrell pulled the family van out of the garage. He stopped in the center of the drive and slid open the side door so that his family, Thomas, Eddie, Sarah, Amy, and his wife, Mrs. Farrell, carrying a wailing baby, Emma, could climb into the van. The kids all jostled for seats.

Jessie followed along behind them, dragging her feet. She had wanted to go see a movie, not venture out into a muddy corn maze, but once again, her tiny voice was ignored.

Come on, Jess, hurry it up.

We’re going to the corn maze, end of story.

Jessie was about to answer, but her mother and father switched their attention to Thomas and Eddie who were laughing and poking Sarah in the sides, trying to make her pee her pants.

Stop it, you guys.

Eddie, bathroom duty for a week.

The boys knew better than to argue.

Mrs Farrell rolled her eyes at her husband, and then bounced the baby up and down on her lap.

Thanks, honey, but Thomas can help me.

Thomas took the baby from his mother and strapped her into the car seat. The baby gurgled and smiled up at her big brother.

Jessie stood outside the van looking in as her brothers and sisters goofed around. No one seemed to notice her.

Mrs Farrell slid the van door shut with a thud, and then slipped into the front passenger seat. She closed the door and gave her husband a thumbs-up sign.

Mr Farrell pulled out of the driveway.

Jessie stood helplessly, arms at her side, her mouth open in a silent “O”. How could her mother have not noticed she wasn’t in the van? Yet again, her family had forgotten her.

The van screeched to a halt. It backed up. The side door slid open.

Jess? What are you doing? Come on, get in.

Jessie looked inside the van. There was no place to sit. Tears brimmed in Jessie’s eyes.

(squishing little Amy against the window)

Come on, sis, you can sit beside me.

Jessie wiped away her tears and climbed into the van.

Thomas slammed the sliding door shut, and the family was off on their adventure.